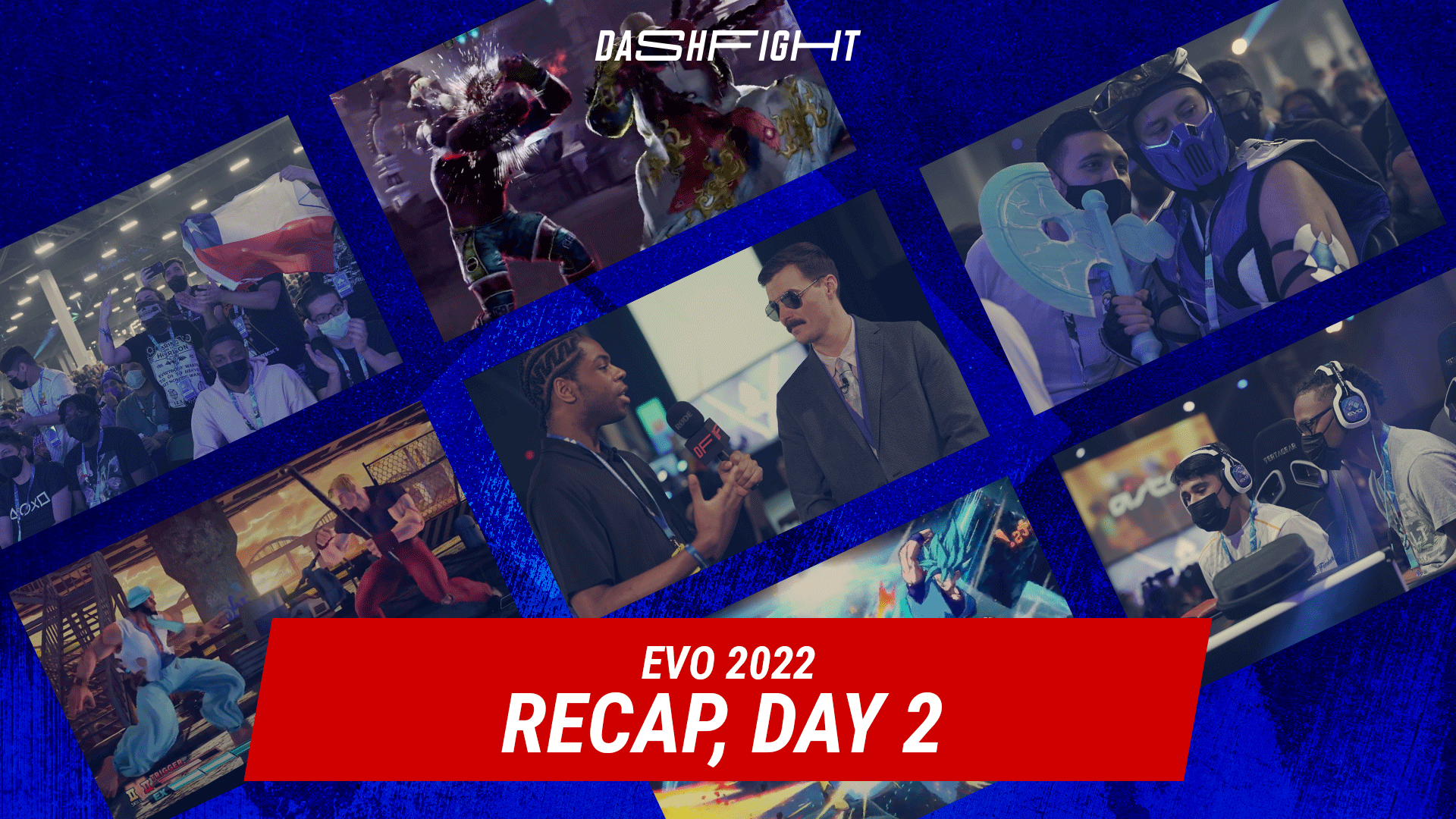 A quick rundown of everything that happened

The second day of Evo 2022 comes to an end. New champions were crowned, upsets happened, the top 8s were finalized, and we got to hear some exciting news about the future of our favorite fighting games. Let's go over it, piece by piece!

Dragon Ball FighterZ is Getting Rollback!

Dragon Ball FighterZ came out back in the January of 2018, way before it became an absolute standard for the new fighting games to feature rollback netcode. If you followed the game's community, you've no doubt seen countless jokes about the frames of delay and connection issues that were caused by this.

Soon enough, it will be a thing of the past, as DBFZ's producer Tomoko Hiroki officially announced that the game will receive a rollback update.

GBVS has recently enjoyed a pretty big update that expanded on the game's mechanics and character balance, and now it's getting a bit more support in the form of the big online tournament series hosted by Versus Asia.

Perhaps sometime in the future, the GBVS fans will also enjoy an announcement similar to that of DBFZ.

Melty Blood: Type Lumina is Getting a Huge Update

While they couldn't announce it directly at Evo, French Bread still got some nice stuff cooking for the Melty fans.

In a separate video, Type Lumina's director, Kamone Serizawa, announced a massive amount of changes to the game and provided a general summary of the two new characters.

Many of you will be delighted to hear that the shield mechanic will be receiving some drastic nerfs, making it less rewarding across the board and enabling more counterplay.

Universal battle system changes will aim to increase the player freedom by adding new moves, new combo routes, and highlighting the things that characters specialize in, making them more distinct from one another.

Those who hated the auto-combo or "Rapid Beat" feature will not be able to adjust it or even turn it off.

All in all, Melty fans are eating good. To see more specific info, check out the video below!

During the Multiversus side-tournament, Tony Huynh briefly appeared to share some of the things that people can expect in Season 1.

Competitive players will be happy to hear that ranked mode will soon become available. Meanwhile, the more casual fans will be able to experience a full-on arcade mode that can be played in co-op!

Outside of that, you can expect more cosmetic additions and Rick & Morty as new playable characters. They won't be the only characters coming in Season 1, so expect more announcements in the foreseeable future.

MK11 has been the first game to start their top 8 during the second day. To say that the whole thing was stacked is an understatement. With so many skilled players, it was like watching one grand final after the other.

Fans saw a bit of an upset when SonicFox lost to Nicolas in the winner's bracket and subsequently was eliminated by A F0xy Grampa in the Losers Quarter-Finals, making it the first MK11 tournament where SonicFox didn't place either first or second. Not only that, but it happened with the iconic caltrops finish.

After that, many would've expected to see both twins face off each other in the Grand Final. However, Rewind had other plans, eliminating Nicolas with a solid 3:1 set.

The Grand Final was an extremely tense and close stand-off, but in the end, Scorpionprocs was victorious. Even Ed Boon couldn't help but comment on his amazing victory.

MBTL's first time on the big stage of Evo will be a highlight for the franchise. Since Melty Blood is a relatively niche fighter, this was the first time that many people saw this game and its competitors, and those players couldn't have done a better job of showcasing how fun this game can be.

With solid character variety, flashy visuals, and pretty close games, it's no wonder that dozens of thousands of people have stuck around to see the Melty Blood top 8 unfold.

Jing's performance was particularly impressive. He traveled all the way from Japan, and on top of defeating the best Type Lumina players in the world, he went on to win three other side-tournaments in the vortex gallery, becoming the Evo's god of anime games.

Similar to MBTL, this has been a huge Evo for the GBVS community, who got to remind everyone that the game still has a passionate and dedicated community that can put on some spectacular matches.

The finals were particularly exciting as we got to see Tororo and Gamera, two of the best GBVS players in the world, face each other off in the Grand Finals. Gamera managed to reset the bracket and went on to dominate the next match.

The $100,000 tournament for the Warner Bros. platform fighter attracted quite a bit of attention. The prize was enticing enough to invite a wild mix of FGC veterans from traditional fighters, completely new faces who started their career with Multiversus, and experienced platform fighter players from Smash, Rivals of Aether, and Brawlhalla.

The latter especially had lots of talented players make it far into the tournament, prompting fans to make memes like #BrawlhallaSweep.

Despite the growing pains of technical difficulties and the wildly varied backgrounds of the competitors, the first official Multiversus was a resounding success, with lots of close games and even a Grand Final reset. In the end, two top-level Smash Bros. players, NAKAT and VoiD, ended up taking the crown, despite getting knocked down to losers early into the top 8 bracket and then climbing all the way back.

Also, while the prize is impressive by itself, it's also extremely commendable that it was generously split between the entire top 32, so even those who placed way outside of the top 8 still got to go home with a solid reward.

The last tournament of the day was DBFZ, and what a hype way to cap off day 2 it was!

Almost every top player you could think of was present for the final top 8 showdowns. The clip below is all you need to know about how hype everyone was, the DBFZ crowd is unmatched!

As if following a blockbuster script, the sets just kept getting better and better until reaching max capacity in the Grand Finals, with Wawa once again showing the world that he is the undisputed master of DBFZ.

We at DashFight also got to interview lots of different players, commentators, and comment creators. Make sure to check out what they had to say.

With so much going on, it's easy to get overwhelmed, but there's still much more to go. Get hype for the final day of Evo!