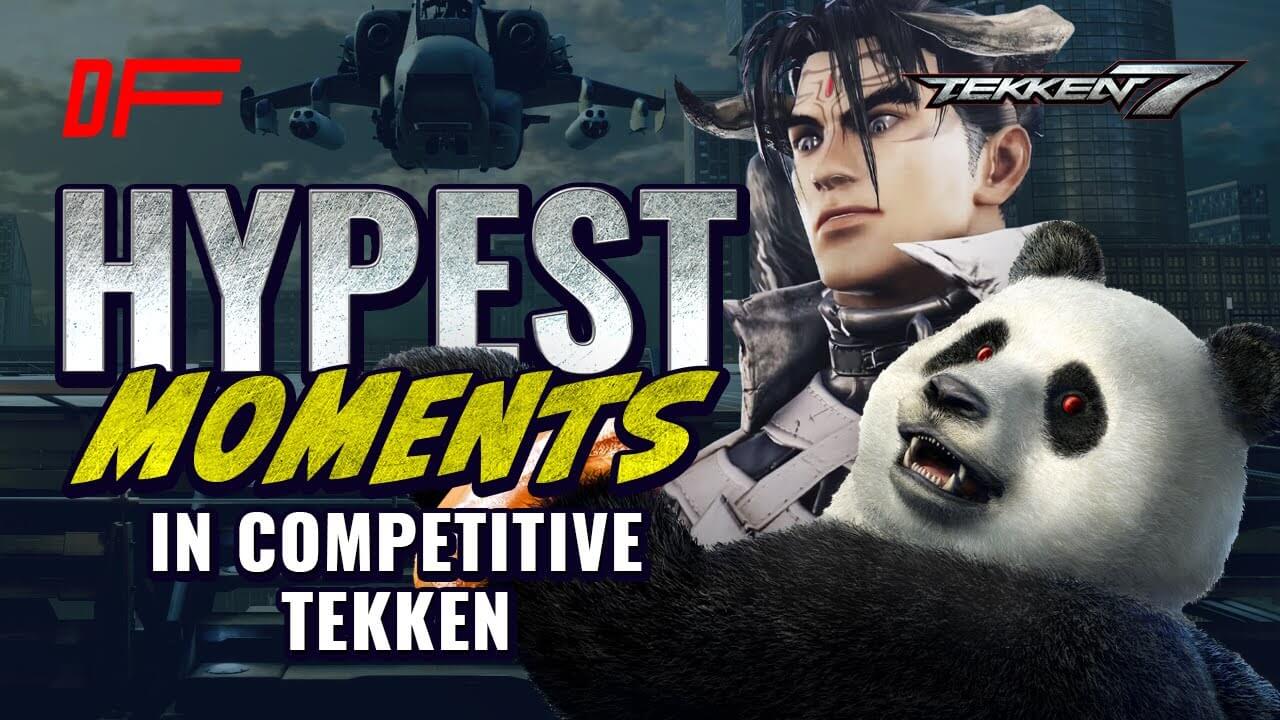 #DashFight
Seven times when hype went through the roof!

Tekken 7 has been out for seven years at this point. Despite going on for so long, the game maintains a healthy playerbase and an incredibly active competitive scene. With tournaments that continue to draw in hundreds and thousands of spectators who want to see the best of the best show off their skill.

Today, we want to take a closer look at the competitive side of Tekken and highlight seven of the hypest moments that made the crowd go wild. Moments that will forever be cemented in the history of this incredible game.

Our first highlight takes us back to the top 8 of Tekken World Tour 2019. It’s the second match of the losers bracket, Rickstah vs. Knee.

At the time, Rickstah already had a reputation as one of the strongest Akuma players out there, going toe-to-toe against the likes of Anakin, Lil Majin, and Binchang. However, this time, he had to face none other than Knee, the god of Tekken himself.

Things seemed a bit one-sided at first. However, starting with the second match, Rickstah showed everyone that he is here to win and that he can clutch things out when it seems almost impossible.

After evening out the score with a hard-fought 3 to 2 match, we get to the final showdown. Rickstah was once again on tournament point, and it was time for a comeback. Despite opening the round with a massive combo and further pressuring Knee at the wall, one well-placed Jet Upper was enough to put both of them just a hit away from death.

And that’s when it happened. At the exact same moment, the two clashed. Knee followed up Bryan’s hatchet kick with a Rage Drive while Rickstah bets it all on Akuma’s invincible but rarely seen super, taking Bryan’s RD on the chin before retaliating with a massive fireball.

The crowd went ecstatic, and even though Knee would go on to win the final round (and the rest of the tournament), this one play easily overshadowed everything else.

From one clutch play to another, we move onto the Tekken World Tour Finals, a match between LowHigh and AwaisHoney. While LowHigh only really entered the international scene with Tekken 7, he quickly became a notable player with his 1st place at Evo 2018 and back-to-back wins at REV Major 2018 and 2019.

AwaisHoney, on the other hand, was one of the amazing players from Pakistan who started to show their skills on the global scene in 2019. Before making it to the TWT Finals, he showed everyone his extremely strong Akuma at FV Cup and ROXnRoll Dubai, taking 1st place at both tournaments.

The two players have fought twice before, always taking it to the last possible round, and Awais always managing to take the final round. At first, their TWT set was no exception. LowHigh and Awais kept going back and forth, and when it came down to that final *final* round once again, LowHigh refused to let the victory slip away.

That’s when we saw it, the most famous Rage Art in all of Tekken. After absorbing the attack, LowHigh was left with barely any health and dealt just enough damage to close out the set, winning over the hearts of the audience and the entire match.

They call him the people’s champion for a reason. Lil Majin’s performance at EVO 2018 was a sight to behold, a perfect combination of showmanship, high skill, and narrative.

While NA has no shortage of godlike Tekken players, it’s no secret that Korea was widely considered to be the strongest Tekken scene in the world. As such, it’s always a big deal to see someone from your region overcome one of the greats.

Lil Majin is one such man. When he reached the Top 8 of Evo’s Tekken tournament, he was the only player left to represent his home turf. Going up against JDCR, the pressure was on, and expectations were high.

The game starts, and everyone is shocked. JDCR completely runs over Lil Majin in the first match, and yet, it would only make what happens next so much more hype. As if powered up, Majin reverses the tides and begins to pile on the pressure while stuffing JDCR’s attempts at a comeback.

It’s a clean 3-0, and like the showman he is, Majin gave the audience his signature look.

In the final match, JDCR began to adapt and took things to the final possible round, but at that point, Majin was unstoppable, taking down one of the best players in the world with utmost confidence. He might have come 3rd overall, but at that moment, he was the true King of Tekken.

Have you ever seen a combo so insane that it changed how people feel about the character? Well, Akuma has a few of those, and Super Akouma was one of the first to show the world the real power of this character.

His prior knowledge of Tekken fundamentals and dedication to one of the most technical characters quickly produced results, with Akouma consistently securing high placements at European events and making sure that even the best Tekken players have to put in the work if they want to beat him.

However, The Mixup 2019 was the moment when Akouma went from being “that strong guy from EU” to one of the best Tekken players in the world. His tournament run was something else and gave us one of the wildest comebacks of all time.

After he was reduced to the last pixel of health and got nearly perfected by Chikurin, Akouma does the Demon Flip and starts an incredible two-bar combo, taking Jin wall to wall and decimating his life bar in the process.

It doesn’t quite kill, and this is where most players would take a safe approach, but not Akouma, oh no. Instead, the madman parries the incoming toe kick, capping off his already impressive comeback with extra spice.

With Tekken’s large cast, most of us wondered at one point or another if we chose the right character. Maybe our main is just not viable, and we should’ve chosen someone stronger? Well, Rangchu casually put that question to rest at the Tekken World Tour 2018 Finals.

While Rangchu is an impressive player in his own right, he was still about to face a serious challenge. Qudans is rightfully celebrated as one of the greatest Tekken players, a Devil Jin loyalist, and the winner of the previous year’s TWT. Not only that, but Qudans and Rangchu already ran into each other in the Top 8 of Evo and REV Major during the same year, with Qudans winning both times.

But this time was different. Rangchu’s strengths became immediately obvious. Content with blocking Qudans pressure, he patiently waited for a chance to strike and swing momentum in his favor. Even when he had only a sliver of health to work with, Rangchu kept his composure and kept fighting, which led to a smooth 3-to-1 bracket reset.

Qudans made some big adjustments in the following set, but it wasn’t enough to stop Rangchu’s momentum. Just like that, he became the Tekken world champion. It says a lot that even Harada himself was shocked to see Panda win the biggest Tekken tournament in the world, a character that many considered to be one of the worst.

While they are certainly fun, hype Tekken moments are more than just flashy comebacks or risky plays. One such example is the entire set between the Knee and JDCR at the REV Major 2017. One of the prime examples of “good ass Tekken,” as a certain noise connoisseur would say.

Knee and JDCR are obviously some of the best Tekken players of all time. On top of that, the two have had a long-lasting rivalry that gave us some intense matches where both of them play at the peak of their ability, this being one of them.

It’s hard to point out the best part of this set. Is it Knee’s impeccable use of Feng’s evasive movement, maybe JDCR’s suffocating pressure? When you have two gods of Tekken go at it, it’s nothing but hype the whole way through.

Even when rounds end with a timeout, it had the audience at the edge of their seat as every poke could become game-changing.

And as with many great Tekken sets, it all came down to the last possible round, with JDCR managing to close it out in a dominant fashion. Years go by, and yet this set remains as one of the fondest memories in the history of Tekken 7.

For the last highlight, we can’t not mention one of the defining moments in the history of competitive Tekken. The moment when an entirely new scene emerged and made themselves known as a force to be reckoned with, and a moment when Arslan Ash became known as the new king of the iron fist tournament.

Arslan’s rise began at a little-known event in Dubai called Omni Universe Gaming. In 2018, Arslan won both Tekken 7 and KoF 14 tournaments at that event, but more importantly, he beat Knee himself. Naturally, this got everyone’s attention. An unknown player beat the god of Tekken? That’s insane.

His streak of winning tournaments and beating top players continued, even beating Knee once again at the SEA Major 2019. With Evo 2019 on the horizon, it served as a real opportunity to face the fiercest international competition and prove that he is, in fact, the best of the best.

In his 10 consecutive wins on the way to the Grand Final, he defeated Shadow 20z, Cuddle_Core, Anakin, Gen, NOROMA, and once again, Knee. But with Knee making out of the loser’s bracket, it was time for the final test.

Both of them had a lot on the line. You could easily see the stress and pressure Knee and Arslan were under as they pushed each other to the absolute limit.

After several arduous matches, Arslan came out victorious, and his reaction says it all. Unbound respect for the community, competition, and his home turf. Even if you were a diehard Knee fan, it would be impossible not to shed a tear of happiness for such an inspirational story of success.