How to Become A Streamer With Iggy 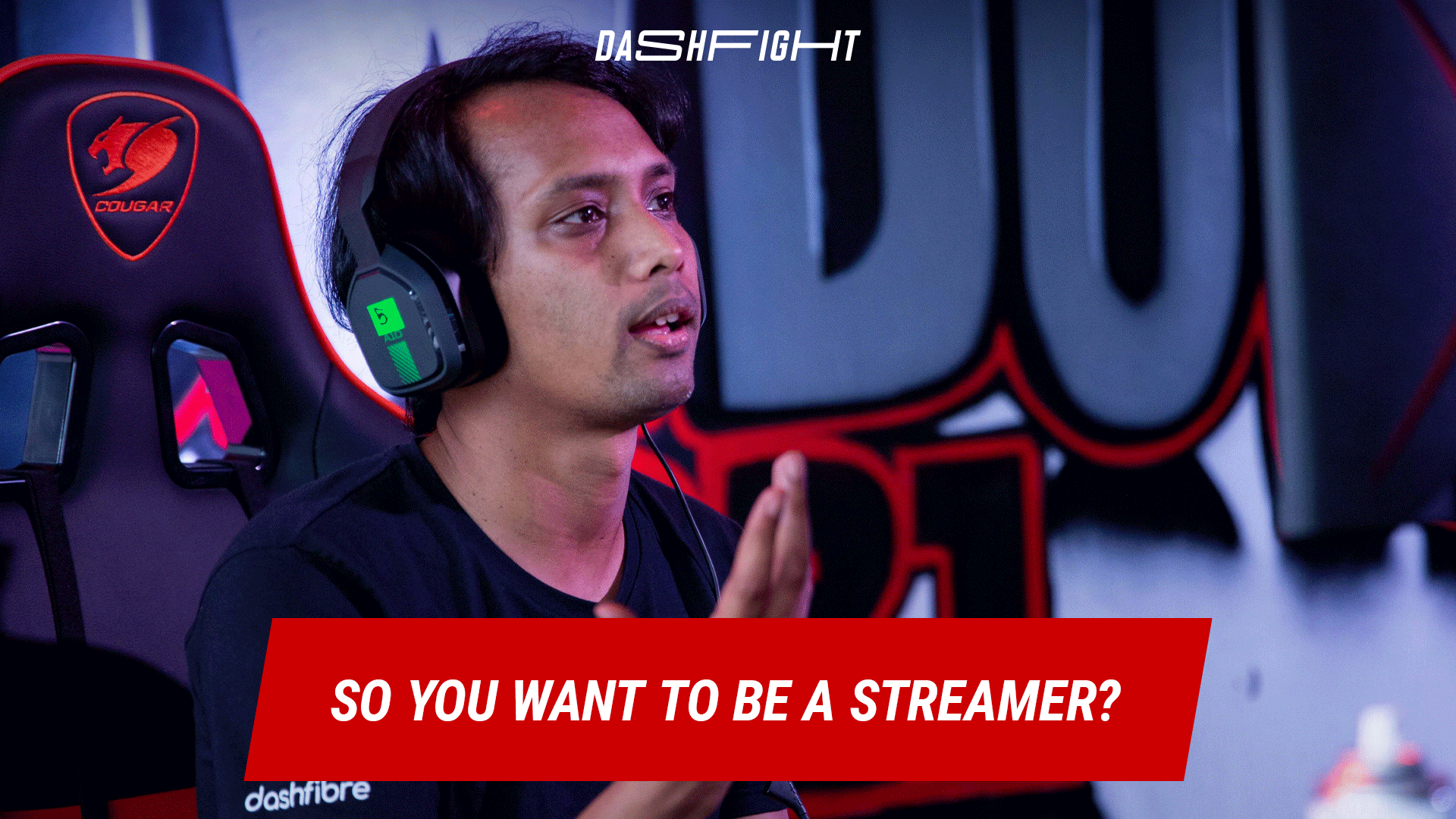 So you want to become a streamer?

This is a path that many have walked and ended up frustrated with their lack of progress. Many more do okay but are unable to move on to the next level. Streaming is a relatively new landscape and due to the changing trends in viewers’ taste algorithms and all the other things that make up doing well in the world of streaming, finding success in this line isn’t the easiest.

Due to the steep cycle of becoming a popular streamer, many have given up on this dream. However, we at DashFight truly believe that you can do anything you put your mind to, so we’ve gone on to ask the hard and burning questions regarding streaming from those who are well versed in it. For this reason, we got the opportunity to speak to one of South Africa’s top Tekken players and streamer, Ighsaan 'Iggy' Latief. He’s an FGC dad, Tekken champion, and all-round good guy.

Iggy’s journey as a gamer started from his childhood growing up with his four brothers all of whom were gamers to an extent. They competed in Tekken 3 together until he just got better than everyone. Soon he was banned from playing against them as it simply led to very, very bruised egos. Soon the only competition Iggy could get was from the FGC scene. Soon he got into streaming and with his natural force of personality was soon able to get a decent following.

Iggy wasn’t the only one kind enough to answer my questions as the Bradlow brothers also pitched in and were a great resource for me. So, let’s get to the questions.

Q - What advice would you give to someone new to streaming who can’t afford the best equipment or who is from a place without the best internet connection.

Live streaming might be a disadvantage for you. This is because of the possible lack of equipment and infrastructure to handle such a delicate task. Therefore, think of your content and ask if live streaming is right for you. If you decide that it isn’t then pre-record your content and upload it. That way, you can focus on keeping to a schedule and creating quality content.

You could argue that this is the first piece of advise when it comes to streaming and tournament organization. One of the sticks used to beat the FGC is the lack of production quality for several events. And while this is valid, in the grand scheme of things, it is a worthless argument. The reason is that while production quality isn’t the very best, the skill of players and communities is unquestionable. This is made possible by regular and consistent tournaments which help people hone their skills. The point being made is that the most important thing for any tournament organizer is to start the journey. As they say, you miss 100% of the shots you don’t take. It is the same thing with streaming or content creation, the most important step is the first one and if you plan to go into any of these endeavours, you should consider this.

If you know anything about production or media, you are probably well aware of how much equipment cost. This is the case with streaming as to ensure you are getting the best quality across to your consumers, the right equipment is key. However, not everyone can afford the best stuff, so it is always advisable to start with what you have. When asked about the best equipment for streaming, Iggy was adamant that it is best to start, show consistency, and THEN investing in equipment. This is becuse of how capital intensive equipment could be and if you aren’t ready for the vagaries of streaming and tournament organization, it is best not to toss your money on equipment. You can stream directly from your console, or you could use other bits of freeware to start out.

This is the most common piece of advise you’ll receive when it comes to streaming. Iggy was particularly intent on this, saying, “It's probably repetitive but the thing about that is, it's (consistency) really, really important, because if you don't come back, people will forget about you, which is the worst thing you want. As an entertainer. You don't want to be forgettable and in order to stay in people's brains, you need to be a constantly in their face”

Q - What can you do when your game of choice for streaming isn’t very popular?

When asked about what to do with games that aren’t the most popular and perhaps don’t have enough of a following for you to create content around, the answer from Junayd Bradlow was simple: create unique content around the game. The reality is this— every fighting game has some sort of community around it even if it is a small one. Your job is to catch the attention of that community and ensure that your content works for them. Creating unique content could mean creating content that no one else is doing, and making memes that are like deep cuts and would be only really understood by fans of the game.

By consistently creating this kind of content, it could even help grow the game’s player base and will make it easier for your to form a niche for yourself.

Q - In what way do you think a streamer who lacks screen presence or has low energy can still somehow reach and captivate their audience?

Many people try to be something they are not in a bid to gain more of an audience. You must understand that there will always be an audience for a wide range of people and personalities. Even if you have a lame style and a boring voice, there are those who love that style of delivery. So, the first thing for any potential streamer worried about their personality to note is that there are a fair number of people that love exactly that.

Build your brand around your personality

There are several streamers and content creators who are loved simply for their dry delivery.  Not everyone wants to listen to a high energy individual. Besides, several creators have built a following based on their perceived dryness. So, if you worry that you are too boring, consider making your personality the star of the show. You’ll be amazed by how many people will love you because of your perceived flaw.

Q - What are the most important practical things someone starting out as a streamer needs to know?

People find this bit a little cringy as they prefer their work to speak for itself. While a respectable stance, the current landscape does not reward silence. You must be willing to plug yourself anywhere you can to try and get an audience. This includes all your social media platforms and anywhere else you can think of.

In the current fast-paced world of today, few people have the time or energy to watch a long video of someone they have no prior relationship with. Therefore, it is advisable to create short form content from your longer content so that people have a small window in which to get to know you. This could include combo videos, reactions, and so on.

If you get big enough, you might be able to get away with a flexible schedule. But, as a newcomer, consistency and rigidity of schedule are integral to creating a workable system. Therefore, when starting out, ensure you pick a time that your can always be available to stream or at least put out content. In this way, your audience will know where to find you, and most importantly, when to find you.

This might feel like an intangible, but without passion, streaming will be impossible. This is because for the most part, streaming and content creation is a thankless task which requires perseverance. It is difficult to find this if you aren’t passionate about your content. It is also quite evident to many when you are simply phoning it in. So, pick your content carefully to ensure you love what you talk about and can create around it without too much difficulty.

Q - How do you avoid burnout?

Creator burnout is a real thing and has plagued many a content creator to the point where they do not create content anymore. The best thing for a creator is to get fairly regular breaks when you are close to the ‘red zone.’ The idea of taking a break might seem counterproductive to some who worry about retaining an audience, but, working through burnout is worse as it isn’t simply counterproductive to your health, but also to your content. When you are feeling at the top of your game, you are more likely to create engaging content that your audience will love. So, don’t neglect to take a break while working on content or creating new stuff.

Another great thing you can do is to regularly schedule content. This could be on any social media platform you are on as it helps to cover up for times when you might not be able to work or when you’re resting. Scheduling posts, content, and other material is a great way to ensure your regular work schedule is not interrupted and you are able to keep up with all your commitments.

Q - What sort of equipment do you need to get started?

Use what you have

One of the biggest excuses to not start something is claiming you do not have the means or necessary equipment to do it. Sure, there are situations where your lack of amenities make it utterly impossible to embark on a certain task, but thankfully, streaming is not one of them. If you have a PS4 or PC, you can stream or create content with relative ease. Iggy recalled his earlier streams and he claimed that they were all done from a PS4. He didn’t show his face, and simply put out his infectious personality and used that to his advantage. As mentioned earlier, it is better to go low investment on equipment when starting out to see how things go before plopping for something on the higher end.